The phrase TIMEISMONEY was the answer to 56A: "Benjamin Franklin adage" as well as a hint to interpreting the answers to four starred clues. The answers needed a little interpretation because while they were clued as common 'time-worn' phrases, the word "time" in each one was swapped out for a word meaning some kind of moolah. The beauty of the swap is that the money words fit perfectly with the unchanged part of the original expression to form new common expressions. Boy, this is one theme that is much easier to live than to explain. Perhaps an example is in order. The clue "When many people solve crosswords" seems to call for the phrase "spare time" but the answer in the grid is SPARECHANGE. Another was "Cheat on, say" which looked like it should be "two time" but the answer was TWOCENTS. A capital showing by Ms. Goldston and Mr. Chen!

Although I figured out the theme relatively quickly, I got stuck for a while in the northeast. I was stumped right out of the gate by "Relief from the desert?" at 1A. The answer turned out to be the very clever ALOE, but I didn't figure that out until I finally got OBAMAERA for the beautifully tricky clue  "44 years?" at 3D. That section probably would have been a lot easier if I had remembered "'The gallant pig' of children's literature," BABE. So much for my literary acumen! 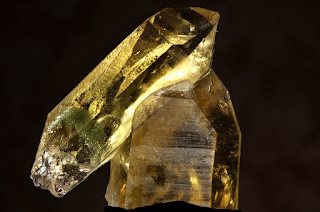 The northeast also contained my favorite of today's C/APs: "Core components for short" (ABS). I started by entering CPU, but there being no way to make the plural fit, I had to reboot. Maybe it's due to the approach of the holiday season, but did anyone else try "Santa" for "Annual parade V.I.P."? Celebrations for STPAT seem to have occurred an age ago. The clue at 51A."'It' factor?" (HORROR) is another good C/AP. Fill-wise, I liked UNITCOST and KNEEDEEP - so many E's! - SMIRCH, and HOOPLA.

To sum up, a very WORTHY effort. HAHHAH.