Another fun, tricky puzzle. A couple of gimmes from my teen years helped me get into this one fairly quickly: THEDOORS (15A: 1960s - 70s band that took its name from an Aldous Huxley title) and VONNEGUT (39D: Author who created the fatalistic optometrist Billy Pilgrim). Coincidentally - sort of - Frannie and I recently saw Jim Morrison's grave in Paris. Hi-ho. 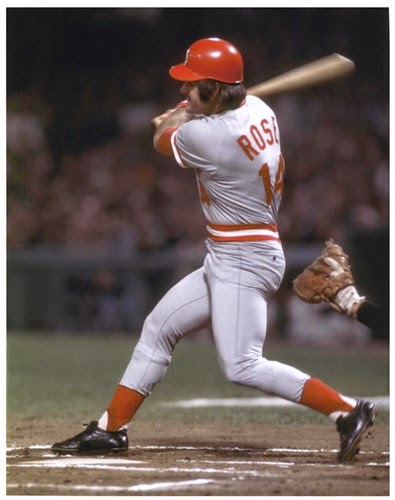 And speaking of my younger days, boy oh boy did I dislike Pete Rose in 1975. (It looks like this photo might even have been taken at Fenway.) But nowadays, I side with those who say he should be in the Hall. There, I said it. He was a damn good ball player. (But still I like to imagine that Fisk is holding the ball in his glove here... heh heh heh...)

And one last one from my past - STRATEGO (35A: Capture-the-flag game). Some time ago one of my older brothers confessed that he always let me have red and go first because the red pieces were translucent with a light on behind me. Older brothers... on the bright side, I like to think that losing every game I played - chess, monopoly, basketball, whiffle ball, hockey - until I was about 16 somehow made me into a better game player. I know Knute Rockne or Vince Lombardi or some other famous coach once said "Show me a good loser and I'll show you a loser," but, well... I don't agree.

So where was I? I guess we could segue from the coaches to XSANDOS (8D: Chalk talk symbols), which I enjoyed, once I got it. And off that, I considered "woosh" and "thuck" before getting TWANG (20A: Sound of an arrow being shot). And I'm not familiar with LOEWE as a "6D: High-end fashion brand), but I see now that it's a Spanish brand that's been around since the mid-ninteenth century!

I liked DOUBT (55D: "The beacon of the wise," per Shakespeare), I didn't know that MIT was the 61A: Alma mater for Benjamin Netanyahu, or that "lutra" was Latin for OTTER. It's from the word "luo" which means "to wash." I don't think I've ever seen Eminem in a DORAG - it's usually a hoodie or a cap - so I didn't love that one, and 34D: Global superpower? was cute-ish for ATLAS, but also not quite right, it didn't seem.

And finally, I enjoyed the combo of ETILES (50D: Most plentiful pieces in a certain board game) (I was lost for a while when "pawns" was too short), and RSTLNE (51D: Bonus round freebies on "Wheel of Fortune").