Just yesterday in the comments section of this blog was a brief discussion of how running into crosswordese in a grid can sometimes bring on warm feelings of nostalgia. For me, seeing Mr. Ashwood-Smith's name on a quadstack puzzle has a similar effect. Awww... a quadstack...

So let's start right in the middle, shall we? I, for one, enjoyed the stack. HURRICANESEASON (39A: Depression era) is both well-clued and accurate! This year's runs from June first to November thirtieth, in case you were wondering. And we didn't get a "one" in any of the answers, but it appears in the clue for AFRICANELEPHANT (40A: One with a smaller Indian relative). And the one that I solved first might be my favorite - 41A: Hurtful pair in a playground rhyme (STICKSANDSTONES). 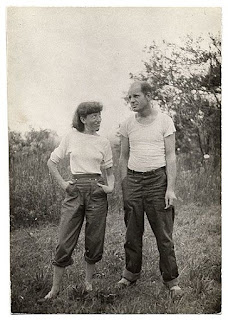 The crosses, often compromised by the exigencies of the quadstack, include three further fifteens (!), and a few very nice sevens and eights - SEASICK (21D: Green around the gills, maybe), SEINFELD (19D: Who called a date "a job interview that lasts all night") (after a couple minor characters appeared recently, the man himself shows up), and REPTILE (37D: Chameleon, e.g.) (classic misdirection). It's nice that they worked in GREATBARRIERREEF (3D: Only living thing that can be seen from outer space) (cool), as it's probably not long for this world. And interesting about 11D: What "Banzai!" literally means (TENTHOUSANDYEARS). Figuratively, I have learned, as a shortened form of "Tennōheika Banzai!," it means, "Long live the emperor!" or simply "Hurrah!"

So that's the bones of the thing, and it's a pretty strong skeleton, I think. In the SW and NE we get two more long answers in LEEKRASNER (58A: Abstract Expressionist who married Jackson Pollock) and INKSTAND (18A: Blotchy, in a way) (not to be confused with PIED (17A: Blotchy, in a way)).

I wish that 1A: Sharp projections (JAGS) had been clued "Benders," but one can't have everything, can one? Still, I'll give it a B+.

Sure, there are some loose spots - AHASH, ECASH, AAS, ERY... but overall, I consider this a good Friday.