OUT OF THIS WORLD

Today we have a tribute to the classic arcade game SPACEINVADERS, complete with the mothership, descending aliens, "SAFE" bunkers, the cannon, and a laser beam. Pretty nicely done theme, overall. I don't particularly love circled letters, and the sight of unchecked squares is a little off-putting, but it's Sunday, and anything goes. There's left-right symmetry, and the words resulting from the SPACEINVADERS (the "ET"s that appear in the middle of several clued words) are, themselves, still intelligible, but un-clued. I looked hard at TAK[ET]EN before realizing that it could be read as "take ten." I'm more familiar with "take five," but I can imagine someone saying "take ten." 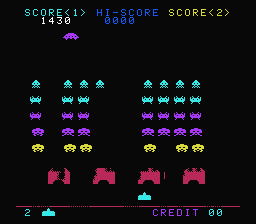 So the theme is pretty well done, but we suffer for it, I think, with a lot of short stuff in the middle, and some long(ish) answers that feel a little dull. INSOLES (92D: Parts of sneakers), ALGREN (71D: Nelson ____, "The Man With the Golden Arm" novelist) (ok, if you say so), and OSAKAN (97D: Certain Honshu resident), for example. The puzzle also seems heavy on the libations, with MOET, BACARDI, MAITAI, ELDERBERRY, OUZO, and MERLOTS. Not that there's anything wrong with that, but still, it's odd.

1A: Note in the B major scale, I give a D+. (That first letter could have been one of five choices, and as I mentioned already, single-checked letters are not my favorite things.) Better, I thought, were such entries as COOKIE (24A: Word after smart or sugar), YOYOS (70A: They can sleep if you play with them) (odd clue, but I like the idea), and ANNABELLE (121A: Inspiration for "Lolita") (I have never heard this before, and will have to research it, but not right now...).

I didn't love it, but I seem to dislike more Sunday puzzles than I like, so your mileage may vary.