This was a fun Friday puzzle. Some of it came quite easily to me - IMEANTOSAY (54A: "That is ..."), BATCAVE (32A: Subterranean hideout in comics), and BOLTS (43D: Parts of a Frankenstein costume), for example, and some came quite slowly - BARRELRACE (50A: Rodeo event), TOTALINCOME (4D: Line on a 1040), and SUBTWEET (34D: Social media post that refers to another user without directly mentioning that person). I was not familiar with that phrase (or action), but that's one reason I like these Gen. Z constructors - they teach us Gen. Xers things like this. Now all I have to do is log into the Twitters and get practicing on my subtweets... are they good or bad? Frowned upon or craved? I need more information! 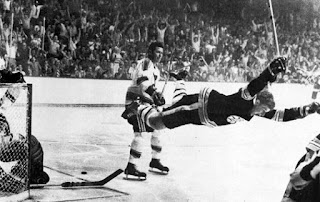 How about that great misdirection with the three-letter names?! Raise your mitt if you dropped in ORR at "37A: Sportsman whose #4 was retired" and then when you finished the NE and saw ORR at "11D: Alexander ____, pioneer and early head of New York's subway system," said to yourself, "Too many ORRs." Alexander Orr is pretty obscure, but I applaud the find. Of the 364 uses of ORR in a NYTX, this is the first time it has appeared with that clue. (Thanks xwordinfo.com!)

And another thing, I think I must have seen QUAALUDE spelled out before, but I don't think I'll ever get used to those two As. Luckily, DIAZ (31D: Cameron of Hollywood) and CATALAN (29D: Language banned under Franco's dictatorship) (grrrrr...) were knowable.

Lots of good stuff. I liked the clue for ACREAGE (7D: Figure that can describe a lot), and I especially liked THEELEMENTS clued with the single word "Weather."

I only know MAME through the Rosalind Russell movie, which does not (I'm fairly certain) include that number. And is there duplication in ESCAPEROOM and PUZZLEBOX? Heh.