The first thing I did after finishing this was to go to xwordinfo to check on whether or not this was the Gary Larson. It's not. But it is a debut! Wouldn't it be great to debut on a Thursday? I sure think so. 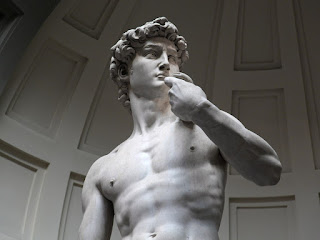 The trick today is to UPTHEANTE. When I was solving, I never really fully assessed the situation. First I tried a rebus, but that didn't last long, and after a while I guess I imagined that you had to "blow up" the "ante," because they were just missing in my answers. I didn't notice until I was reviewing the puzzle that the word ANTE runs up from the A in each theme answer. Very nicely done.

I liked ACADEMICS (18A: Professors and such) and TURNABOUT (60A: Fair play, to some), and I really liked INDISARRAY (29D: Unorganized) and DRINKATHON (10D: Affair for bingers). Hah! And speaking of amusing, I appreciated the clue for ANI (42A: Something a Mississippi cheerleader repeatedly calls for).

Some odd plurals (ELMOS, ANDS), and more than a few tough names (RAU, ELIE, ESAU, and BEAME), but overall, I come down in favor of this one. Congrats on the debut, Mr. Larson!