The NYTX is getting into the holiday spirit today with candy-cane shaped circles containing the names of various candies. In order of how much I like each one, the candies are BITOHONEY, POPROCKS, AIRHEADS, and STARBURST. Yecchh... Starburst. So waxy. So undelicious. 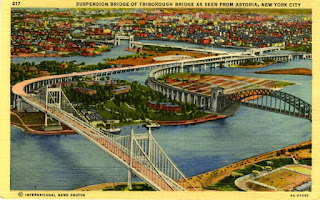 In addition to the canes, we have the revealer CANDYCANE right in the center. And speaking of that, it seems like there have been more puzzles with horizontal symmetry lately. Not that there's anything wrong with that.

Not much of considerable length today, which is probably a result of so many triple-checked squares. I'm sure it was tough to keep the fill clean, and even with the short word length and the tight squeezes between sections, we still end up with things like BACKIN (23A: Retro), SAVVIER (32A: Sharper), IRONLAW (10D: Absolutist's rule) (?), ANSA (33D: Archaeological handle) (?), OCA, ISM, BAA, HPS, ETIC, and LEU. SOB. And that's not including the proper names - STEEN, COBAIN, BOURNE, ERNIE ELS, and LORELAI (60A: "Gilmore Girls" protagonist). UGGS!

I did, however, enjoy 40D: Fate who cuts the thread of life (ATROPOS), which reminds me of my brother Rich, who was wont to quote his old high school Latin teacher saying "Clotho spins the thread, Lachesis determines its length, and ATROPOS cuts it." Or something like that. Rich? You out there?...

Also enjoyable were CROCHET (36D: Stitch with a hook), PEDICAB (3D: Human-powered taxi), TANGLED (42D: 2010 Disney film that set a record for the most expensive animated movie ever made), CODDLE (24A: Baby), and RESIDUE (9D: What's left). I would have liked the clue for RENTAL (41A: I'm not buying it!) without the exclamation point. Somehow that ruined it for me.

Overall, I thought it had a few too many compromises, but I do like the candy cane theme. Happy Holidays!