Once again, my lack of contemporary popular culture knowledge is a bit of a problem. I didn't recognize the name Harry Smith as someone famous, so the whole "newsroom" theme didn't really come through. For those like me, the theme is seen in 17A: Anchor man? (POPEYETHESAILOR), 25A: Sound technician? (MARINEBIOLOGIST), 48A: Beat reporter? (ALLENGINSBERG), and 65A: Executive producer? (WHARTON). "Anchor man" and "Beat reporter" work well, and I guess you need those other two, but they are definitely more generic roles. I actually like the punniness of the answers much more than I do the theme itself. 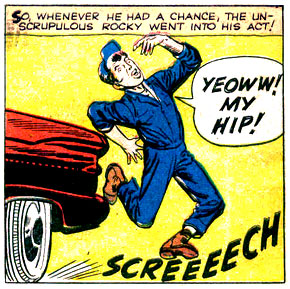 There's also lots in the fill that I like today. The two long Downs - ROADCLOSED and IMNOTREADY are both good, and there's bonus material in ASSAIL, STEROID, SCARAB, ANOINT, and the full ALGORE. I even like GOTYA (50D: Successful prankster's cry).

1A: Kindergarten learning (ABCS) - D. Kindergarteners aren't truly graded, but 1A is.
Best: SADDAY (39A: What dropping off a last child at college is, to many parents). I have never dropped off any kids at college, but I was the last one that my parents dropped off, so this made me think of them fondly. I wonder what they said to one another on the long drive home from Wisconsin?
Worst: CIGNA (Giant in health plans)

HATTIPS (56A: Quaint gestures of gratitude) was amusing, don't you think?