Twas the night before Christmas, and all through the grid
A creature was appearing, that was not a mouse
The circles were laid in the puzzle with care
And even a fun little red rebus square! 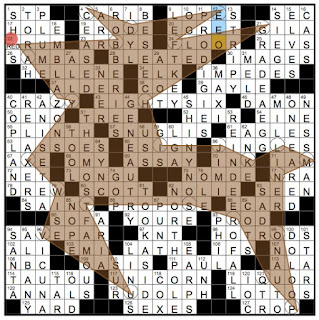 I really enjoyed this puzzle. Kind of cool way to get the drawing in there by using the alphabet in circled squares. The drawing is really quite good, and it seems to me that it would be very tricky to make this work properly. I mean, you've got some leeway, I guess, but not very much. Maybe the head could have looked a little different, but the legs, body, and tail are all just about perfectly rendered. Very cute. And they did it all while still fitting in over fifty squares of symmetrical thematic material, plus some bonus theme answers scattered here and there (SAINT (84A: Nicholas, e.g.), ELVES (15D: Notably non unionized workers), JINGLES (66A: Sleigh bell sounds), WISE (79D: Three ____ men), SANTA (94D: Deliverer of Christmas packages) (Amazon didn't fit!), and NORTHPOLE (82D: Starting point for an annual flight) to name just six!).

With that kind of constraint, I would expect quite a bit of OMY, ANKE, NOMDE, and ARR, but really, it didn't seem so bad. I noticed more the fun clues like 86A: Give a ring? (PROPOSE), the hilarious "48D: Like van Gogh, later in life (ONEEARED), and "95D: Capital whose name ends in its state's postal code" (ALBANY). That last one took me entirely too long. I had the A and all I could think of were Augusta and Atlanta! I was also thrown off by thinking of a dovecote at "28A: Called from the cote" (BLEATED), but apparently, a cote can also be used for mammals.

I enjoyed the quality fill like PLUME (3D: Large column of smoke), EMBLAZONS (18D: Decorates brilliantly), and MILLINER (47D: Hatmaker). Sure, we get STRIPY (13D: Having streaks) and LEFTKEY (9D: It moves a cursor back), but I don't mind today. I enjoyed this puzzle quite a bit. I hope you did too.

Now I'll spring to my Subaru sleigh, to my friends give a whistle,
And away to the Whole Foods for tenderloin with no gristle!
But before I sign off, I'll give a non-PC fright,
by wishing Merry Christmas to all, and may you have a good night.

Posted by Horace Fawley at 8:34 AM