Today's puzzle takes us on a spin around an attractive pinwheel shaped grid, which makes space for some nice long downs. I particularly liked STEELCAGE, CANDYCOAT, and CRUNK - the latter is, of course, not so long, but it sure is a great term. I also appreciate the word GERMANE, but my spelling of it went AMUCK, costing me a couple minutes. Once I made the correction, though, I quite enjoyed "Things drawn by eccentric people" (STARES). Ha! We've all been there.

As chance would have it, I recently acquired the Paul Gallico novel "Mrs. 'ARRIS goes to Paris" from my grandmother's book collection. It turns out there are several Mrs. 'Arris adventures in which she travels to New York and London. She also goes to Amsterdam's red light district - but that, of course, was never published.

Does anyone else think there might be a mini theme including BEERNUTS, MOXIE, KUSH, and other GAMETES? Too much? 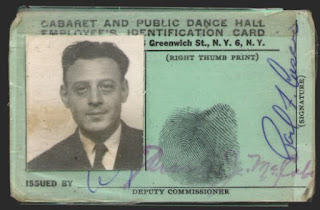 I wanted MORALCompass instead of MORALCENTER, but the grid would not allow it. Also, I don't take a STROBELIGHT. My preferred "Party flasher" is of another kind altogether. OHBABY! :)

Like yesterday, I thought this puzzle REPAID on the easy side, but that was lucky for me because things are ORNATE around here today and I have got to ENCASE.