Scattered around this 15 x 15 DIGSITE are multiple F[OS]SILS, which, when taken together, spell out [TY][RA][NN][OS][AU][RU][SR][EX]. What, a rebus puzzle on a Wednesday? What is the world coming to?

I was happy with it, let me tell you! I got the [RA] first. Even once I got the first rebus and the revealer, I still didn't get what it was spelling out until the very end, because I thought each fragment would represent its own species. It's a pretty SHOWY piece of work. You can even imagine that the outline of the fragments makes a T. Rex's tooth or claw. It's also really nice how the two middle revealers cross each other.

I suppose there's such a thing as OPE[NN]OTE tests. For me they were always known as "open book," but times may have changed. The young'uns don't know from books, you know. It's all online now. GYMBU[NN]IES is also much nicer than "gym rats." Is there a gender difference?

Speaking of gender specific terms, the intersection of THEM and HER was amusing. Is this a wink at those of us who are displeased by the use of a plural pronoun to refer to a singular person? I suppose if we're going this direction, I'd prefer to use xe/xem/xyr. Note the X is pronounced as a Z. 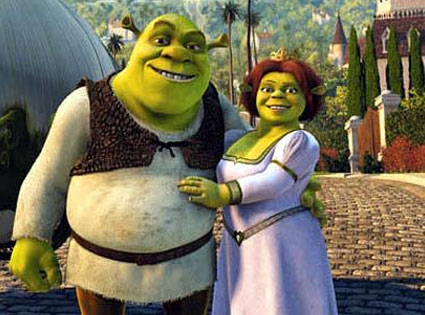 I really liked 35D: Mole (BE[AU]TYMARK) for the wide open clue. I was thinking the animal, the term for an undercover spy, before I ever came around to the dermatologic term.

In any case, I say SHEESH to the beauty of the construction, and enjoyed the solve, so overall pretty hearty thumbs up.