My solve time is exactly 6 minutes on January 6. While that's kind of neat, one of these days I would like to get a sub-six time when it's my turn to write the review.

One bright facet of today's puzzle is its theme: birthstones, clued by the month they are associated with. There are five theme answers in all: the birthstones for April, May, June, July, and February. In the Times Crossword app, when the answer GEM at 11A is highlighted, the theme answers appear in bands o'er the grid. There was an additional theme-related answer UNCUT (Rough, as an 11-Across). Of the available gems, I like AMETHYSTS best both word-wise because it looks the most odd, but also looks-wise, although my favorite precious gem stone of all is sapphire. Interesting that crossword darling "opal," October's birthstone, didn't make the cut. :)

Other treasures in the puzzle included VACATE, GENT, ELASTIC, TUNIC, and GLUT. 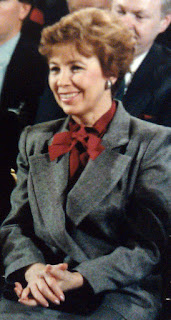 There were only a couple of features that I didn't take a shine to in today's puzzle. I never enjoy the inclusion of 3-letter partials, in this case ASA (___ rule, typically). The only other clouding for me was AILERON (Airplane wing feature) and SAG-AFTRA (Hollywood union) which, on their own, seemed like a bit of a stretch for a Monday, although the crosses were rock-solid. All in all, a fine way for me to ring in a new year of reviews.