It's an interesting theme today, with the names of SEVENSEAS, each containing the letter C. Kind of cool, I guess. It might have been more cool if those other two Cs in the puzzle could have been avoided, but then I suppose the smoothness would have suffered. And as it is, I think the balance was pretty good. 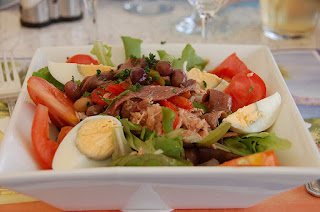 Things got off to a good start with SNOB (Kind of wine drinker who might remark "I'm getting hints of unripened banana"), and then the nice pairing of "Tears" (RIPS) and "Tore" (RACED). It's always fun to see that kind of wordplay in the clues. ALBINO for "Moby Dick, for one" was surprising. And we don't hear the word IRENIC (Promoting peace) enough lately, sigh.

I got hung up for quite a while in the East, where CARANTENNAS (Moving targets for waves) took me far too long to catch up with! And even though I didn't enter it, I couldn't get bIb out of my mind for "It's often left on the table" (TIP), which didn't help things. I did, on the other hand, enter mUff (Ear covering) (HUSK) off the U in UPENN, and that didn't help either! And my Spanish knowledge starts somewhere around SENOR (Monsieur, across the Pyrenees), but stops just before REINAS (Spanish queens), apparently. I recognize it, but could not produce it without help. And my favorite part of that whole area was "Spare part, perhaps" (TENPIN), which should come easily for our friend Huygens, who has been doing a lot of bowling lately.

It's a decent Wednesday.