Today being stressed is fun! Seven theme answers play with stress by cluing common expressions to force a change in pronunciation. Take PROJECTGUTENBERG, for example. It is the oldest digital collection of freely available digitized books. But when given the clue "'We can't hear you in the back, Johannes!'?" it is necessary to move the stress on "project" from the first to the second syllable to make the answer correct for the clue. 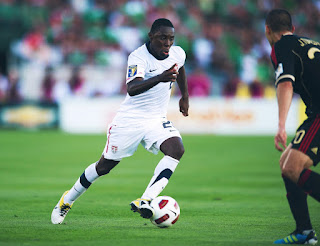 My favorite of the theme answers is PERFECTSCORES (What composers do when they add the finishing touches?). CONTRACTTERMS (Shorten words like "forecastle" and "boatswain"?) and DISCOUNTSTORES (Ignore what you have in reserve while taking inventory?) are both a little forced, and I must be missing something with CONVERSEALLSTARS (Encouragement at an N.B.A. mixer?), because I don't know the "encouragement" meaning of "conVERSE."

In non-theme material, I loved the NE corner. The stacked Downs - NOHELP, APOSTATE, SEASONAL, and ACRONYMS (Nascar and FIFA, e.g.) are all strong, and the top four crosses were all clued well, I thought. There's the clever "Mission-driven org." for NASA, the interesting trivia in "Intl. group founded in 1960 with five members" (OPEC), the tricky "Winter leaf covering" (HOAR) (I first tried "rime," but is that only when it's on the ground? I should probably look that up, but I'm in a car at the moment, so I'll do it later), and finally, "Place to fill up in Canada" which, I thought, was at least trying to put an interesting spin on the old crosswordese, ESSO. And under those is the first of a fun pairing: "Brown in a Food Network kitchen" (ALTON). It's mate, "Brown in the kitchen" (SEAR), appears a little further down on that side.

DOJO (Martial arts center) and DUMA (Russian assembly) made another pair - of foreign four-letter words starting with D. :) And "Samoa salesperson" (GIRLSCOUT) had me worrying for a bit - "What do I know about commerce in Samoa?" thought I...

It was fine. I like playing with language, but I wish I understood the last one better. Or at all, really.