Remember the Y2K scare? Hahahahaha... those were the days. It seemed like such a big deal, and then it was nothing at all. Well, maybe there were a few little glitches here and there, but elevators didn't plummet in their shafts and planes didn't fall out of the sky mid-flight, as some predicted. And not only that - it seemed like such a monumental milestone, the year 2000. Now it's 20 years ago. Time....  who came up with that crazy idea?

But let's not waste any more of it and get on to the review, shall we? It's a special day here at H&FDTNYTCPFCA, because we're all together out at Colum's house after another fun New Year's Eve party. Lots of eating, drinking, and game-playing. Talk about FINDINGDORK, I think we all did pretty well for ourselves. :) 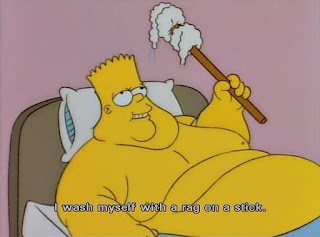 MAKOCLINIC (Employer of nurse sharks?)
KELPREVIEWS ("It's green and slimy" and "It tastes like the ocean"?)
FINDINGDORK (Nerd's goal on a dating app?)
ENDOFSTORK (Pointy bill or tail feathers?)

It's an amusing set. My favorite is KELPREVIEWS, and ending with ENDOFSTORK is an elegant touch. Not unexpected, though, from a constructing pair that includes such a pro as Mr. Chen.

And now Colum has jumped in to put in his two cents... I'm impressed by the level of skill in the construction of this Wednesday puzzle, a day that often has the oddball grids. Look at those lovely down answers, such as 9D: Fictional sport whose rules are invented during play (CALVINBALL), and 2D: State of mind (HEADSPACE).

But I will disagree with the clue at 6D: Times New Roman alternative (ARIAL). I will never take an Arial.

And one more paragraph. Y? Because Frannie wants to add her 2. K? That's WEAK, you say? Perhaps, but since we, of the mostly FAKENAMES, are the puzzle review OVERLORDS, you must ACCEDE. However, in the spirit of the New Year, I resolve to try to DUEL better this year by TYING to work in some AONE material.