This morning at about 4am I wasn't asleep, so I opened my iPad and did a puzzle from the archives (July 5, 1997) that looked like this: 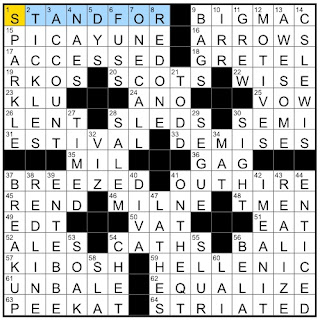 It was something of a surprise then, you will now appreciate, for me to open today's puzzle and find that it looked like this: 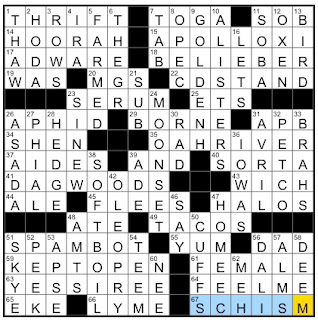 In the old Saturday puzzle, the plus signs were just black squares, but today, a Thursday, they play an important role in the solve. When I got to 9D: Financial incentive for an executive to stay at a company (GOLDENH[AND]CUFFS), I thought we might be dealing with a very unwieldy rebus, but when I saw that the Potomac tributary was beginning with "Shen," I was able to understand what was going on, and the revealer AND (+ ... with a hint to four pairs of answers in this puzzle) simply confirmed it.

It's a nice trick, and it's probably not fair for me to say this, but I'm always a little disappointed by the "--" clues. They both take away a certain number of clue-portunities, and they kind of give away the trick - at least in part. But still, I loved SHEN[AND]OAHRIVER, THEGR[AND]OLEOPRY, and the handcuffs. DAGWOODS[AND]WICH is fine, but it's a little too similar to SUB (Hero) isn't it? OK, now that's really getting too picky.

I love to SOFTBOIL a couple eggs for lunch, YESSIREE, and I was amused by seeing the unusual PHIAL (Small glass container). APOLLOXI (About 600 million viewers watched its pilot in 1969) was a nice C/AP, and SCHISM is a great word.

HOORAH to Mr. Seigel for this Thursday debut.