Some of these same-word two-word answers work very well - EXTRAEXTRA (Call from an old-time paperboy) (You almost want the clue to have included ("with '!'")), NAMESNAMES (Sings, in a way), and PEOPLEPEOPLE (Extroverts) are all terrific. MONACOMONACO (Grand Prix city) is, I suppose, technically correct, but no one says that. "Where are you going?" "Monaco." "Monaco what? Monaco, Illinois? or..." "MONACOMONACO, you Philistine." I suppose that could happen. And when I see the two central entries, I think of them being said three times. But two also works. Really, it's a fine theme. It was fun to realize what was going on, and it made the whole thing slightly easier to solve. 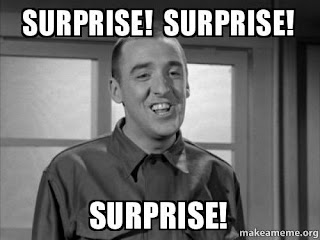 One of my favorite C/APs today is "Lunchtime estimate" (ONEISH). I didn't see that coming! :)

PESKY (Annoying) is a fun word, STALWART (Trusty to the end) is something you don't see every day, HIGHHORSE (Perch for the self-important) got a chuckle, and PARADOX (Logical conundrum) is always lovely. I had never heard of MOFONGO (Fried plantain dish of Puerto Rico), and I don't like UGLYCRY (Weep in an unflattering way, in modern lingo) one bit. It just seems like a way to make someone who's obviously unhappy feel even worse about themselves. With two Ys, I'm hoping its not too crossword-friendly, because I'd be glad to never think about the expression again.

I'm guessing the two little plus signs made of black squares are to be taken as thematic, and if so, I applaud the detail. I enjoyed the trick, but I guess it kind of felt like a Wednesday Sunday, if you know what I mean. :)

I feel like I've been a little bit cranky all week, but you're in luck because Frannie takes over tomorrow. I'll be back in a few weeks, and hopefully I'll have said IVEMOVEDON to whatever has been EATingAT me this week. Bye bye!