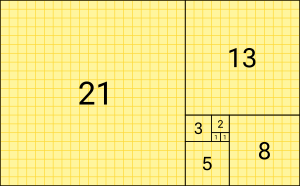 First described in 200 BCE in works about Sanskrit poetry, and later by Leonardo of Pisa (Not that Leonardo, this one was also known as Fibonacci) who used it to calculate the growth of rabbit populations. Those numbers get big fast, and that seems to correspond with visual evidence in our backyard, especially now that there are no more neighborhood cats. Sigh.

Anyway, that's my attempt to bring this mathy topic into the realm of words, where I'm more comfortable. And speaking of mathy, how'd y'all like STRAWY (Like some horse bedding)? Frannie says it's "gone round the corner" - so bad it's become funny. I tend to agree.

Another way to bring the number into the real world is through nature - the SPIRAL of NAUTILI and SUNFLOWERS, as Mr. Wagner states, both appear to show the concept. And rounding out the theme we have MATHTEACHER, GOLDENRATIO, the grid art, and, I suppose, SCIENCECAMP and Terence TAO.

Some fun QMCs today included "An alternative?" (THE), "Propper noun?" (TEE), and "Turn on the stove?" (STIR). And on the other side, non-QMCs, we have "They seem to believe otherwise" (SECT) and "Opining opening" (IDSAY).

A few unfamiliar threes and one near toss-up at the cross of KORUNAS and USC, but I guessed correctly and things turned out ok.

Math... I suppose some folks will eat this up, and to them I say, Enjoy!

p.s. I'm not terribly surprised that I missed a beautiful detail of the circled numbers - they are all on numbers in the Fibonacci sequence! That's a lovely touch, and I really do congratulate Mr. Wagner on this construction. Nice work.

Posted by Horace Fawley at 8:05 AM