Today, the Turn starts with that somewhat rare creature - the "Thursday that's simply harder than Wednesday and [presumably] easier than Friday." No rebus, no phantom letters outside the grid, no black squares actually being taken as letters or whole words... just a regular themed puzzle.

And the theme is that classic 70s song "The Gambler," made famous by Kenny Rogers. Here's a thing I learned just now - that on that recording Kenny was backed up by The Jordanaires, who long before had more famously (perhaps) backed up Elvis Presley and Patsy Cline. 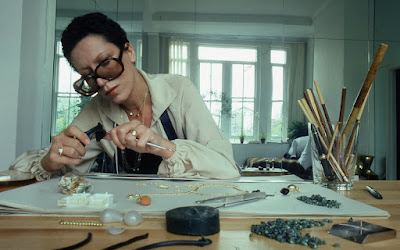 So anyway, the famous chorus of that song becomes the clues for the four longest answers, and they are given clever, non-poker-related answers.

It's a solid set and an original (to me anyway) theme. So we can put CHECKS in those boxes.

With 1A being "The Winner Takes It All" group (ABBA) and Singer Diana (ROSS), I thought this was going to be a cakewalk, but now I wonder if Mr. Kaye was simply setting us up in the 70's music mindset. But then MOPTOP (Mod do) pushed it back into the 60s. Maybe that was for the Jordanaires? OK, I'm definitely over-thinking this...

My biggest challenge came in the SW corner, where AFEWZS (Forty winks) and MTETNA (View from Catania, in brief) were slow to come. I had even put in ZUNI (Pueblo people), but took it out after I entered WETS (Moistens) and SPAS (Places with springs) (Yes, I tried "bedS" at first...), because ___WZS solicited an OHDEAR.

The cross of BIO (It might be in the form of a thumbnail) and LOLA (German film award akin to an Oscar) was my last entry. That's a tough cross, and I was really stuck on the idea of a thumbnail image before finally figuring it out. I mean, it had to be a vowel, right?

So no trick, but a fine puzzle nonetheless.