This is a fun theme today. Adding a final "E" to the last word of common phrases makes it into a name, and then the clue is appropriately silly. As in "96A: Comic's copy of 'The Importance of Being Earnest'?" (JOKERSWILDE) and "4D: Single copy of 'The Bonfire of the Vanities'?" (LONEWOLFE). And it's not just authors' names, the best one might be "52A: Reason for Brosnan fans to watch 1980s TV?" (BUNSOFSTEELE). Pretty good. 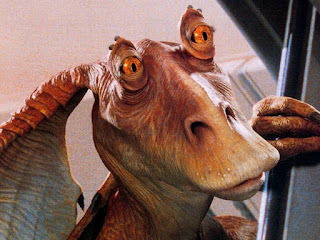 There's some unusual fill, though. We didn't know TROPHIC (51D: Nutrition-related), MEDE (26A: Ancient Persian), or KRAIT (98D: Poisonous snake). That snake, I learn from Wikipedia, is native to Southern India and is one of the "big four" group of snakes responsible for the most human snakebites in South Asia. The other three are the Indian cobra, the Russell's viper, and the Saw-scaled viper. Lucky, there is a widely available "venom neutralizer," so don't cancel that trip just yet.

Overall, we liked it a lot.