Another Halloween-y theme today, all about vampires and their banes. They don't like DIRECTSUNLIGHT, GARLICNECKLACEs, or a STAKE through the HEART. I'm less familiar with their aversion to SILVERBULLETs and THEHOLYBIBLE, but really, except maybe for the sunlight, these could be pretty much anyone's banes. Well, ok, some people probably like the bible...

And sort of like yesterday, with "CISCO" being in a grid that centered around San Francisco, today we get the clue "58D: Vampire ____" (BAT) in a clue about vampires. Odd. 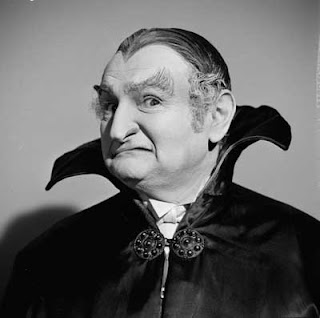 Anyway, it's fine for a Tuesday, and it's timely, what with this being late October and all.

I liked the clue for NOTYET (6D: "Waiting ... still waiting ..."), and "5D: Leaning to the right?" (ITALIC) had me stumped for a while. And speaking of being stumped, I wanted "DOOhickey" for DOODAD (28D: Thingamajig), and so I needed almost all the crosses before I figured that one out. EARLYON (44D: Close to the start), too, took a while to come to me. And I was surprised when CRUX (10A: Central point) turned out to be right, but really, it's just what the clue says!

Really, I guess what I'm trying to say with that last paragraph is that it played a little harder than Tuesdays often do for me, but as we've often said here at Horace and Frances and Colum, we welcome early-week challenges. So while this doesn't really have any marquee answers (and it does contain the disgusting EGGSAC), I'm still going to give it a thumbs up. Not way up, 'cause y'know, it's got some tired stuff like UAR, ALII, LDL, INI, OLES, etc., but it's also got the crazy-looking KGBSPY, and the theme is decent.