Frannie and I are trying to get on the road somewhat quickly today, so I really bore down hard on this puzzle, and luckily, things went my way!

I first got traction in the south with the side-by-side gimmes THERAVEN (58A: 72 of its 108 lines end in "-ore" sounds) and EASYREAD (60A: Book that doesn't require much time or thought). From there, FINLAND (40D: First country in the world with universal suffrage (1906)) took me way too long (I'm half Finn!), but I was still proud when the answer finally came clear. Go Finns! 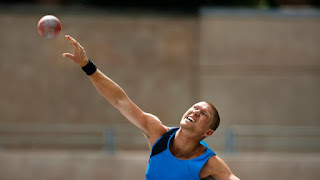 Overall, this is lovely and clean, with some fun answers. ICYSTARES, HAMSTERWHEEL, PASSIONFRUIT, SLAMPOETRY, JIGSAWS, and JETBLACK are all fine answers. And is this the first time LMAO (36D: "OMG, I'm cracking up!") has been used? I like it!

There's really very little too criticize. There's ETERNE beside SERA, and old Mortimer SNERD, but really, ce n'est pas trop, and there's more than enough good, interesting fill to overpower it. TERCET (56A: Sonnet-ending unit) is tricky both because it's not a common word and it's not commonly used in Shakespearean sonnets. He usually went with couplets, didn't he? But that ASIDE, I let it go because it's "end-of-the-week" fill.

p.s. 1A: Graveyard hour (FIVEAM) - Could this just have been any hour that falls into a traditional "graveyard shift?" or is there a special hour called "The Graveyard Hour?" If so, I would have expected it to be earlier. In any event, it's not terrible. I'll give it a B-.