This may well be the oddest theme I have seen so far in a NYT crossword. FOURTEEN POINTS (39A: Proposal of Woodrow Wilson ... or what the scoring values of 18-, 27-, 55- and 66-Across total) refers to Wilson's blueprint for an amicable and fair ending to World War I. I didn't know that off the top of my head, I looked it up, as I'm guessing many other will. I applaud the casual reference to major historical documents, and the encouragement to review world history, but I also feel that the whole endeavor is slightly cheapened by its connection with sports. And the contrast between the inclusive, "one-world" feeling of the FOURTEENPOINTS and the (almost) uniquely (North) American sports is also slightly odd. But, well, we must have our themes, so let's add them up: Four points for a GRANDSLAM, three points for a HATTRICK, one point for a FOULSHOT, and six points for a TOUCHDOWN. Yup, that's fourteen. 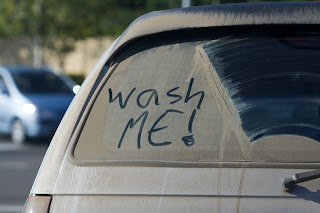 I like the unexpected pair of WEREWOLF (2D: Lycanthrope) and ORATORIO (3D: Handel's "Messiah," for one), and the symmetrical TEAHOUSE (40D: Place to chat over a hot drink) and GOODTOGO (9D: All set) is also strong. OILCUP (17A: Receptacle in a machine), on the other hand, gets a rating of "Whaaa?" What the hell is that? I've never heard the term before in all my life. SEENAT (44A: Spotted attending) is weird, but ok, but NONSELF (58A: Material that is foreign to the body) is a definite OOF. There are a few other POOR answers, but I think on balance it stays AFLOAT.

1A: Uncommon bills (TWOS) is ok, but slightly confuses the number-based theme, since it's not actually involved. I'll give it a C-. And one last thing - my error came in one of the many French entries (!! - I'll be in Paris in 24 hours!), TOI. I had put in "TOn" for 32A: French pronoun, because they usually use possessive pronouns, not reflexive ones. And at the end, I saw that TnEIN was not working for "28D: Many a Happy Meal toy," but it took me a while to correctly parse TIEIN.

So there you have it. An odd Wednesday for sure.