1A: Edible Asian sprout (BAMBOOSHOOT) (B) gets us off to a good start today. My rating of it might have been higher, but the clue just seems a little too odd. "Sprout?" IMEANREALLY? But I don't want to sound negative right up front here, I enjoyed this one.

Interesting about MSG being "12A: Something found naturally in tomatoes and potatoes." I did not know that. And how about the fact that "snow" fits in where RIME (19A: Winter coat) belongs? I was so proud of myself for seeing past the trickery in the clue when I dropped "snow" in there. Ha! 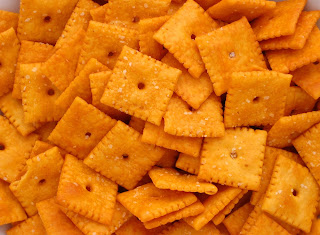 I'm guessing that OLIN (10D: Massachusetts' ____ College) will draw some fire, and I will not defend it. I live about five miles from it and I did not think of it until I had OL_N. Also, saying "Massachusetts' college" is like saying "Paris street, Rue ____." It's maybe a little too vague.

It's a little odd that PERIWIG (42A: Top of the British judicial system?) (excellent) meets up with EARWIG (24D: Pincered creature) (eeeuw!), but those endings come from totally different sources. In fact, I just learned that the earwig has a set of rear wings (wig) that were thought to resemble human ears. Also, Wikipedia assures us that earwigs do not purposefully crawl into ears. Thank you, but it's still TMI.

So anyway, there's a lot to like in here, and I doubt I'll remember to mention all of it. I enjoyed AMA (2D: Quack stopper, for short) when I finally understood it. Colum, did you get that one right away? And I didn't know that Patrick Stewart's "A Christmas Carol" was a ONEMANSHOW. That would have been something to see. And how is it possible that I've never heard the name Sir JONY Ive before? He seems to have basically been Apple for the last twenty years or so.

And while we're down in the SE, I'll just end by saying that I love that 11-stack down there. HOMOERECTUS (57A: Distant ancestor) (tough clue), INTAKEVALVE (62A: Car engine component) (again, quite vague... you really need to have a cross or two) and MYSTERYMEAT (64A: Much-joked-about cafeteria offering) (very nice) is a pretty great stack.

There are some bits of glue, the worst of which might be the OLAN/OLIN/TYRO block, but there's more than enough to make up for it, in my opinion. A good end to the week.