This was a really nice puzzle. 1A: "The Great" or "the Terrible" (EPITHET) (A) was a strong start, and in that same seven-stack INANITY (17A: Senselessness) is also quite good. Crossing those two, TOYSOLDIERS (7D: Little green men) had me fooled for far too long, and I was also surprised by the use of "Decoy" as a verb to clue ENTICE. 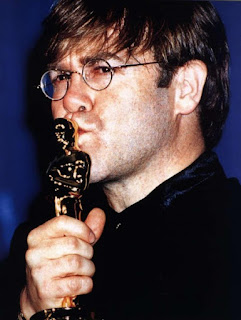 There were lots of interesting entries: NETTLES (64A: Bugs), PIEDATERRE (27A: Apartment that's a second home) (not exactly how I'd describe it), MRRIGHT (55A: Husband material), HOTELROOM (20D: Something to enter with a card), and PURSER (47D: Chief flight attendant). Wasn't Gopher the PURSER on the Love Boat?...

My only criticism might be that some answers seemed a little too obvious for a Friday. The central 15, for example, THEDEVILYOUKNOW was nearly given away by "38A: Better adversary to deal with, in a saying" wasn't it? And for those near Boston, NORTHSHORE (13D: Cape Ann's area) went in immediately. Same with MARIANO (15A: Yankees closer Rivera) for anyone living in New York (or passingly familiar with the game of baseball).

Not all of it was that easy, though, so I don't know what I'm complaining about. AMEN CORNER (12D: Spot for spirited worshippers) still doesn't make sense to me. I can only think of the Masters golf tournament when I hear that.

Loved the tri-lingualism of GATO (56D: Chat, across the Pyrénées), and CAPOTE (45D: Hoffman who won Best Actor for playing him) was tricky, because my mind went first to Dustin, not Philip Seymour.

OK, I'll stop now, because this is getting long, but as I said, I enjoyed this one.