This might be my least favorite type of theme - the hidden, or discovered, word found and circled in order in theme answers. It just seems so random. Messy, even. The letters aren't evenly spaced, nor the words of equal length... and maybe it's actually quite hard to do, I don't know, but not everything that is hard to do will be appreciated by everyone. 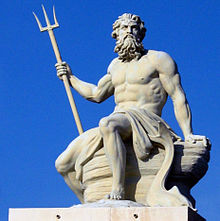 On the other hand, I really like all the theme answers, and I like gems, so on that level, it's a hit! Although it is now impossible to find a TOLLPLAZA (17A: Place to pay the going rate?) in Massachusetts, it's still well-known in other parts of the country, and the other themers - JEOPARDIZE (25A: Put at risk), PAPERAIRPLANE (35A: Something that might be thrown behind a teacher's back), and PRESUMABLY (49A: In all probability) - are even better!

1A: Harley-Davidson bike, in slang (HOG) gets a C, but much of the rest of the fill is above average. You've got the nice side-by-side AMYGDALA (10D: Part of the brain believed to control emotion) and POSEIDON (11D: Neptune's Greek counterpart) in the NE, and below that there's the lovely trio of WARGOD (46D: Mars, for example), ACCEDE (47D: Give in (to)), and YEOMEN (48D: Guards at Buckingham Palace). The inflected plurals more tolerable somehow, aren't they?

I'm a little sick of seeing ERESTU and ELIA Kazan, but I understand how this game is played, and sometimes I wonder why I even bother to call them out...

Lastly, it occurs to me that all three downs in the NW could be describing Peter OTOOLE. He was GOLDEN-haired, and kind of a HOTDOG actor. Heh. Doesn't take much to amuse me.