The party never stops at the NYTX! Today's grid has a rather elegant circle theme falling in comforting symmetry from left to right through the grid: "fest," "gala," "bash," and "fête." We'll let it slide that the first and last are the exact same word in different languages, because the repetition seems so appropriate for a "new year's" celebration. The revealer, PARTYDOWN, is nicely set off in the center, and the theme-encapsulating answers are all quite strong. So thumbs up there. 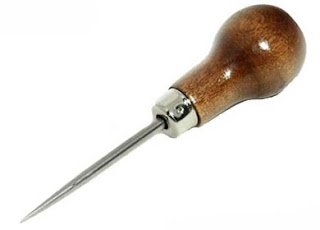 I wonder if 4D: Three on a grandfather clock (III) could be thought to be theme-related? Not theme, of course, but it does show a strong verticality. And it would have been very easy to change GENE (59A: It's made up of DNA) to "René," which would have allowed for "RRR" ("Elementary school basics?") in a spot symmetrical to III. I think that could have been a nice touch, but perhaps others would have found it too confusing/distracting.

The rest plays something like a themeless, with a few flashy bits like STIFLE (44A: Hold back, as a yawn), EPITAPH (60A: Message that might end "R.I.P."), and the plural CICADAS (65A: 17-year insects). There's also the possibly inflammatory AHSO (58D: "I understand," facetiously), a smattering of OPIE, OBOE, SRA, ASA and the like, and 1A: Leatherworker's tool (AWL) is not particularly gripping (D+. I like the word, and the tool, but still...), but overall, I thought this was a very good Monday.

I did not recognize Mr. Deodene's name, and I learned from xwordinfo.com that he has not had a puzzle in the Times for five years, but that this is his 39th to date. So while he certainly is not new, he is new to me. Here's hoping it won't be another five years before we see his byline again.

p.s. I wrote this in a comment a couple days ago, but then I thought that it might be seen by more people if I included it in the body of a review instead, so I repost it here:

A sincere thank you to Mr. Shortz and all the puzzle constructors. And another thank you to you, Mr. Amory, for sharing with me the pleasure and the burden of pounding out a puzzle review every single day of the year. I don't know how long it will continue, but I'm still having fun and I hope you are too. And finally, thank you, our readers. We wish you continued fun, challenging, and satisfying puzzle-solving in 2017, on computer or on paper, and in real life!
Posted by Horace Fawley at 8:52 AM