Kind of a quick Thursday to start The Turn. The revealer gives us two choices, and I'll take the latter "blackjack" to describe the theme, which is that the word "jack" is assumed to be represented in asterisked clues by a black square. As in YOUDONTKNOW[JACK], [JACK]PINE, and [JACK]OFALLTRADES. It's too bad that "jack vey" and "tar jack" aren't things, because then every time a black square were used to mean "jack" it would be consistent with all Across answers. But one can't have everything, can one. 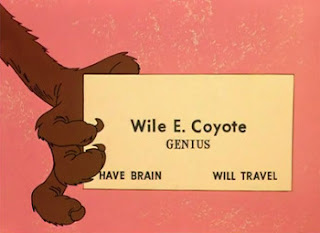 There's a lot of theme material, and I think the fill suffers somewhat. 1A: Half of a Wall Street firm since 1882 (SACHS) gets an F, largely because they probably shouldn't be a firm anymore, and might not be were it not for the kindness of the U.S. Government. TILER is weak, MMI, INICE, INKER, ACUT, REWOVEN, ENDON, UIE, BYS... I don't mean to TAR it as a whole, but it does seem like there's a lot of meh-terial™ today.

My favorite entry is probably EMPTYSUIT (11D: Ineffectual exec). Most interesting factoid goes to 36D: Company for which about one in eight U.S. workers has worked (MCDONALDS). Most obscure proper name, 50D: William ____, physician who championed bedside training (OSLER). Wikipedia elaborates on the name, giving the impressive-sounding "Sir William Osler, 1st Baronet." He was one of the founders of Johns Hopkins Hospital, and created the first residency program. I'm guessing our (no longer a) resident MD, Colum, will have needed few, if any crosses.