A CARRIE FISHER tribute puzzle today from Mr. Polin. It's a little odd (ok, kind of a lot odd) to have her quote broken up such that the second part comes after the final part, and the WANKENOBI line is especially unfortunate on its own, but I'm going to give it all a pass ("This is not the criticism you're looking for..." I hear Mr. Polin telling me...), because, come on, it's CARRIE FISHER! 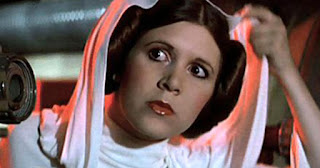 Overall, it's a (hastily constructed - it's only three weeks since she died) tribute puzzle for a beloved screen icon. Perfect Tuesday fare.

Posted by Horace Fawley at 4:21 PM