Greetings! it's a HAFDTNYTCPFCA special report - live and direct from the Stamford Marriott! 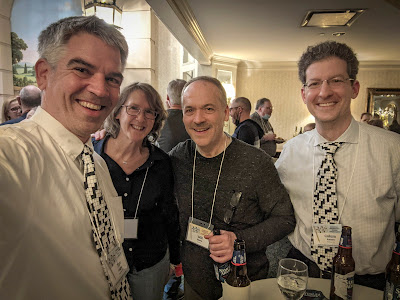 It's been EELY great spending time with all of our crossword friends, OREO "Squares" as we call them. Either there's an after image from staring at puzzles all day, or there's a preponderance of plaid this ANO.

Puzzle Five lived up to its CRED. Even though Will Shortz pretty much promised Colum that it would be easier this year, it was not. Not at all. A couple of us were left in the room after the time limit had passed, but we were by no means alone. Another among us twigged to the trick, but that was not nearly enough to accomplish a completed, correct puzzle. What can we say? It's the puzzle that separates the wheat from the chaff, and we know which one we are.

We've met some folks ANEW this year, and connected IRL with people we met virtually at last year's tournament. Shout out to Philbo, who is blowing the competition out of the water. PLUS, Colum has been sitting next to a first-time solver who is doing extremely well. We expect great things out of these individuals!

It's great to be here again. The ballroom is pretty much full - almost 500 contestants this year, we've heard. If we don't come down with COVID next week it'll be a miracle, but it's been well worth the risk. Ready the OBITs.

Currently, the three of us are recovering in the bar after a gruelling day of puzzles. I   *bzzt bzzt* Philbo here, co-opting the blog! That'll teach them to leave their laptop unattended... Great fun!  So nice to meet friends old and new.  One correction - last I checked, the competition is very much still in the water... *bzzt bzzt*

OK, we've gotten the laptop back now... I'll just sum up by saying again how nice it is to be back with our people. Now it's time to get some rest before the early start tomorrow. Thanks again, Mr. Shortz, the constructors, the officials, the hotel staff, and everyone who helps to make this tournament happen. Being here makes me believe we're starting to get back to real life again.

p.s. Here's another photo of us with Philbo. Note that Philbo is holding a trophy - one of two prizes he won over the course of the weekend! 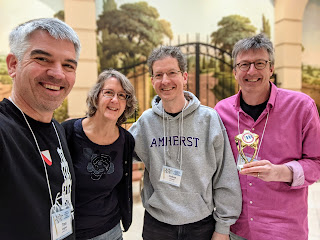