I enjoyed solving today's puzzle, but I have to admit after looking over some of the answers here, there are some I'm not convinced by.

Let's start with 1A: Youngster in a stream (OTTERPUP). I mean, nobody's going to be upset by these guys: 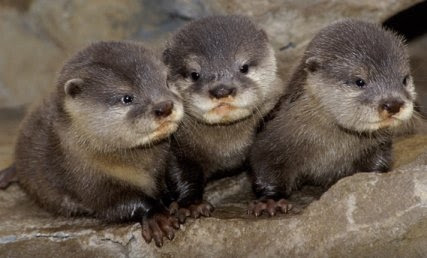 But still, wouldn't they just be called pups? Or if you had a bunch of baby dogs and baby otters together, I could see having to say, "Well, let's only put the otter pups in the water, not the dog pups." And that might come up all the time in a perfect world, but to tell the truth, I've never come across that particular situation in my life.

So that's a lot of words to explain why I can only give 1A at B-.

I am similarly not particularly convinced by DATATYPE (would anybody ever say that?), while MSDEGREE sounds a bit off (it's something that would be written but not said: in conversation you'd just say "Master's degree," or even more likely, "Master's").

Fortunately, there's plenty here that's far more LEGIT. For example, my favorite answer (and the first one I put in with confidence after Kung PAO chicken) was 12D: Absence of preconceived notions (TABULARASA). And today, CHASEUTLEY makes a full-named appearance. I think of him primarily as a Phillie, but times change.

Similarly, 29D: The hardest part when making guacamole? (AVOCADOPIT) made me go YEAHDUDE! Not literally, mind you. I don't make a habit of shouting out my approval as I solve a NYT crossword puzzle. People might get TEED off.

The Pokémon slogan I could do without, but it's a nice 15-letter answer, so there you go. I guess that makes it inevitable that it would find its way into the puzzle, and today is its debut.

I finished in the NW, where I wanted ohpLEASE. The actual answer, PUHLEASE is much better. And UBERPOOL is nicely contemporary. On the other hand, I don't, as a rule, take a DEWLAP.

I give it a thumbs up overall.