Frannie and I solved this one together late last night with cousin Kenny. As luck would have it, Kenny does a lot of golfing, so he overruled my suggestion of "even par" for "1A: Golf handicap of zero" in favor of the correct answer, SCRATCH (A-). Coincidentally, Kenny is also from ALABAMA (14A: Where Forrest Gump played college football), and I remember joking about the 16A: "Funky Cold Medina" rapper (TONELOC) with one of his step-siblings, so that whole NW corner went quickly. 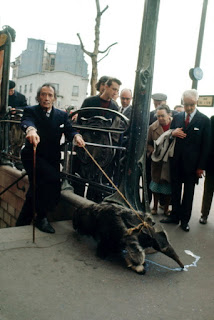 Frannie worked out most of the rest while Kenny and I worked on the bottle of Clyde May's Alabama style whiskey that he brought as a house-warming present, but as I review it now, this puzzle really has a lot of great answers! ANTEATER (12D: Creature that Dalí walked on a leash in public) (which Frannie threw down off the first A!) (and yes, which merits mention in print as well as a photo), GHETTOBLASTER (33A: Source of break-dancing beats), HACKATHON (7D: Collaborative computer coding event), DIVEBAR (23D: Seedy place to drink), INKBLOT (19A: Test pattern)... all good. Less good, in my opinion, is ESOTERY (52A: Arcane matters), which must itself be somewhat esoteric, as it does not appear in my "Webster's New World" dictionary. But the ratio of questionable glue to solid material is highly skewed to the good, so I'm not complaining too loudly.

It's the end of the month again, so I'm hoping that Colum will take over tomorrow. And if Frannie takes November (as she has hinted), I'll see you again in December. Happy puzzling!