Let's see, covers, PILLOWTALK, blankets, SLEEPOVER, SAWLOGS, MONSTER, DUSTBUNNY, sheets, pad?, and ANDSOTOBED, and we end with DREAMY. Very nice touch, that. And if your female partner is going to bed in a TEDDY (also ending on the last square), so much the better. Too much? Probably. Anyway, I think the theme is cute. I like that the SAWLOGS is on the bed and the MONSTER and the DUSTBUNNY are below it. It's well done.

1A: Figaro, e.g. (BARBER) gets a B. The first clue I put in with confidence was TESS (10A: ____ Trueheart (Dick Tracy's wife). You know, speaking of that, I realized after writing yesterday's review that the first clue that I said I entered confidently on the Saturday puzzle was "WOODS" (Section of a golf bag), but that is crazy, because it's a classic binary-type answer. "Irons" would have fit just as well, and it's just dumb luck that I picked the right one. Today, I chose wrong on 7A: Foal : horse :: calf : ____" (ELK). I tried "cow," and didn't change it until KAYAK (9D: Popular airfare finder) (it's what we use!) became clear. Come to think of it, I suppose 46A: One making a pitch? (TUNER) might have fooled some today in a similar way, since "adman" is such a commonly used bit of fill. And did you notice that "Tate modern" fits in the same space as TATEMUSEUM (91A: London home to many John Constable paintings)? I did. 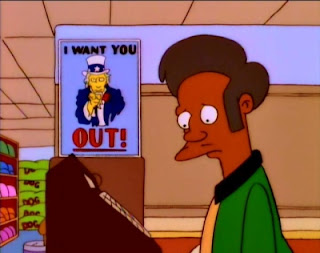 I enjoyed the clue for ISOLDE (38A: Tryster with Tristan), and the two "Roosevelt of note" clues were fun (ELEANOR & TEDDY). SPELEOLOGY (39A: Study of caves) was inferable from "spelunking," but I'd never known "34D: Sloughs" to mean MORASSES. Similarly, and more annoyingly, I have never heard "the OLDS" for "ma and pa." Who says that?!

But overall, I rather enjoyed this Sunday puzzle. Lots of fun stuff (WISEACRE, YESIDO, PASTICHE, BEERPULL) and not too much glue (ASTO, PREF, ISSO...), so ASAWHOLE, it's good.