I'm not sure I understand the title today - "One by One." The theme, so far as I can tell, is that many answers include two letters that are pronounced as letters with "and" in the middle. Id EST, [BO]RAILROAD (23A: Neighbor of Illinois), and GETSALITTLE[RR] (46A: Takes it easy). The former was one of the more difficult clues, I thought. Pretty tricky referencing the Monopoly board and not the U.S. Map! And in the Down direction, the rebus just acts as the two letters without the word "and" in between, as in STRE[AM]LINE (75D: Simplify) and A[SP]ERUSUAL (76D: Just like always) (Frannie often uses this turn of phrase). 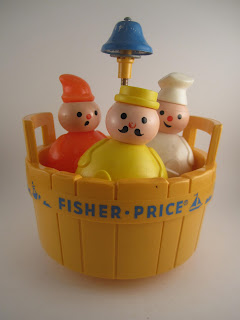 So that's the trick. I guess. I feel that maybe there's something more that I'm missing about it, but I've spent all day lugging furniture and boxes around, and now I've had a Manhattan, so I'm just too tired to figure it out. (This is a trick I'm using to spur all you lurkers into actually commenting and telling me what I'm missing.)

So what else? What was the "feel" of the solve? For me, it was pretty good. I thought "5A: Indication of freshness" (SLAP) was, itself, fresh, "34A: 24 in a caffeine molecule (ATOMS) was an interesting way to clue a plural bit of crosswordese, and "94A: Material in two states (SLUSH) was tricky! Maybe a few too many gratuitous plurals - KEROSENES, HIVES, GOLIATHS, LIRAS, and LOOSES, to name just some, but there was more than enough decent material to balance it out. There were, for example, many fine long Down answers, such as ALTERNATIVE (20D: Choice), HUMANRIGHTS (62D: United Nations concern) (also a plural, but not gratuitous), LAPELPIN (28D: A U.S. flag is a common one), and YOULOSE (33D: Calvin Coolidge's reputed reply to a woman who bet she could get more than two words out of him). DILATER (85D: Optometrist, at times), though, not so good...

I put in ELAN (1A: Flair) (C+) fairly confidently to start things off, but it might have been AVAST (3D: "Cease!" on the seas) that I was absolutely sure of.