I really enjoyed the fight I had with this puzzle, even though I ended up bruised by it, finishing with one error. I had a lot of trouble in the SE, and I think that SEAHAG (48D: Hideous foe of Popeye) (I kept thinking that my dad would have known this one), UNRIGS (49D: Strips, as a ship), and even, to some extent, POPPET (50D: Valve with a disc at the end of a vertically set stem) - a nickname used by Mackenzie Crook's character in "Pirates of the Caribbean" - all being nautical, led me to consider the "remove excess water" meaning of 62A: Bails (JUMPSSHIP). I started by changing the beginning to pUMPS____, I ended up with pUMPSSHIP, which was not entirely nonsensical. At least that's what I told myself... What makes it sting a little more is that I put in JUT (62D: Project) early on, but convinced myself that "pUT" could also work. Ahh well. "Dems the breaks." 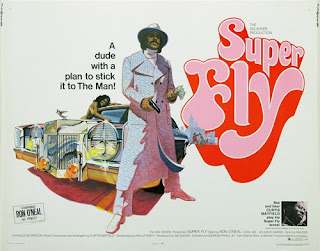 1A: Really huge number (GAZILLION) is a solid A. And the first entry I put in confidently was DROP (22A: Lose, as a carrier might with a call). OMINOUSLY (15A: In a foreboding manner), EGOSURFS (12D: Searches for oneself), STINKEYE (14D: Dirty look), BIGWHOOP (36D: "Well, la-di-frickin'-da!") ("frickin!"), TEENANGST (67A: Cause of rebellion, maybe) - all excellent. And that's just the long stuff. TIPPED (21D: Rewarded for waiting) is well-clued, and DOUP (25D: Decorate) just doesn't stop looking weird! ZITCOM (3D: Adolescent program, slangily) is amusing, 10A: Bridge pair, briefly? (SPECS) took me far too long (bridge of your nose), and BAYONET (36A: Gun point?) was clever.

All that fabulous fill comes at the expense of oddities like OUIDA (61A: "A Dog of Flanders" author), PELISSE (40A: Fur-lined coat), ESSA, ERGOT, INO, and SIPON, but those didn't bother me as much as UPTOGRADE (17A: Sufficiently good), for which I would have preferred "up to snuff."

Still, this was a fun Friday.