A slightly cryptic revealer today - 25A: With 36-Across, what this puzzle features, literally (PICTURE / FRAME). And then we have 50A: Organization that honored those referenced in the 25-/36-Across, with "the" (ACADEMY). So the ACADEMY honored things in the PICTURE FRAME. What are those things? The movies that are named around the perimeter of the puzzle. AVATAR, JFK, REDS, AMADEUS, and the six others, have all been nominated for Best Picture by the AMPAS. Not bad. I like the uncommon perimeter theme, and I like that they were all clued (as much as they could be) in a non-movie way. And for the record, I've seen seen five of the movies: AVATAR, REDS, AMADEUS, TESS, and PLATOON. I wonder if there's also an inside theme of a new baby girl ONTHEWAY for the puzzle constructor? If that's true, it's even more impressive that the fill stays decent throughout.

And speaking of the fill, SANAA (33A: Yemeni capital), though unfamiliar, is perfectly fair game as a world capital, even though that status has, apparently, been brought into question. Wikipedia tells me that after a coup d'état a couple of years ago, Aden was declared the temporary capital. Still, SANA'A has been inhabited for over 2,500 years, so it's about time I get to know it better! Here's a photo of the old part of town, which has been declared a UNESCO World Heritage Site. Beautiful. 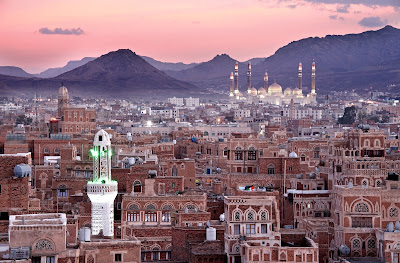 Posted by Horace Fawley at 7:59 AM