The crossword week has started off strong with this fine Monday grid from Mr. Polin. It played slightly harder than normal for me, which is a plus, and the theme (STUFFIT) is dense, and runs both horizontally and vertically, which, in my opinion at least, is another plus. Down with uniquely horizontal themes! (pun intended) 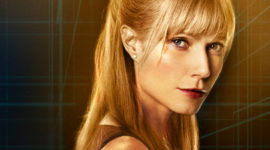 1A: Diminishes in intensity (ABATES) gets an A. It's an interesting six-letter word, and on a Monday, that's all it takes, apparently, to get an A. Either that, or the picture of PEPPERPOTTS has put me in such a good mood that I'd have given an A to "erne." The first answer I put in confidently was ARAB (7A: Resident of Oman or Yemen).

Even with the dense theme - I count 71 squares, some of it interlocking - the fill does not contain any real clunkers (with the possible exceptions of SNAX and AGITA), and Mr. Polin has managed to get in some rather interesting entries. BUSHWA (10D: Complete rubbish) will be, I'm guessing, the most controversial, but I applaud the gutsy entry. It's another word that I will try to incorporate into my speech more often. Soon everything I say will come from the NYTX. Yes, I might be a DORK...

Overall, I very much enjoyed this one. How about you?