If I had finished the puzzle 1 minute and 9 seconds faster, my time could have been 23:45. To me, that would have been cool, for reasons I can't explain and don't fully understand. Even though my time was not ideal, it's not too bad for a Friday for this solver - and that in the face of some very clever clues.

A review of some of my favorites in this puzzle brought to mind the old Question Mark / Non-Question Mark Clue conundrum. The whys and wherefores of the question mark in clues continue to elude me, but today, I'm giving the preference to the NQMC's. Take a look at these beauts:
"Still on the line, say" (DAMP) - I was stuck on the phone.
"Command that one shouldn't follow" (STAY) - totally boss!
"It requires some assembly" (QUORUM) - this one's a win-win for the excellent clue and unusual fill.
"Take turns, say" (STEER) - I had STEE_ and I ran the alphabet twice before dawn broke over marble head, as Mother used to say.

Still, there are some ZESTY contenders in the QMC category as well. It will not surprise our regular readers to hear that when I read 35A: "A home?", OAKLAND did not jump to mind. On the other hand, when I read "Crack jokes, perhaps?" I immediately thought of the notion behind (so to speak) POTTYHUMOR, but I thought to myself, "oh, they won't go there." I was wrong to DOWD them. And how about UTERI for "Fetal positions?"- another good one squeezed in there. 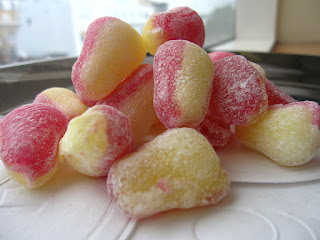 The grid-spanning SCRATCHANDSNIFF is nice fill, although if there's one thing I in this world that I wish would VAMOS, it's perfume. Any magazines that have scented ads go right in the trash. MOONQUAKE was also nifty; I don't think I've ever heard that term before.
Perhaps I was able solve the tricky clues more readily because of the number of relatively easy clues in several places in the grid, some OBOE here and DOSE over dere. I was a most surprised by 2D: "Peek-__" this late in the week, because what else could the answer be but ABOO? "Deck wood" (TEAK) and "Pal" (CHUM) also seemed a little FLAT. DONTGETANYIDEAS, though, I'm not complaining!
~Frannie.