I started today's puzzle in the northwest, at 1A as I usually do, and I was able to read the clue and enter the answer until I got to 22A. Without any crosses, I couldn't immediately think of an 8-letter equivalent for "V.I.P.s", but after checking out a few of the Downs, BIGSHOTS asserted themselves. After that, I decided to see if I could complete the remainder of the puzzle looking only at the Across clues. The answer was no, no I couldn't. I hit another road bump almost immediately with "Stand-up comic Margaret" at 27A. Regular readers of this blog may be surprised to learn that I had heard of her, and her last name (CHO) was somewhere in my brain, but I couldn't access it it in a timely manner, so I skipped that one and moved on.

I didn't have to skip again until I got to 61A "Like Satan and some owls." I couldn't come up with their common denominator right off the bat, but when I got HORNED, I enjoyed it quite a bit.

The southwest corner contained the only group of Across clues that I didn't immediately know the answers to. My first thought on reading "BBQ spoiler" at 64A was 'ant' which didn't fit, so I moved on to the more grid-matching-but-also-incorrect 'gnat.' In company with the BBQ planners of the clue, I forgot to consider the weather (RAIN). I drew a complete blank on "Shoestring woe" at 68A. I can't remember a time when I've had a knot in my shoe lace. In fact, my most serious shoestring woe is that that they won't stay tied, so suffice to stay that KNOT didn't leap to mind. And with the Brady Bunch, I went wrong thinking of 'sibs' or 'bros' rather than SONS. A glance at the Downs quickly resolved those quandaries. Good ole Down clues. :) 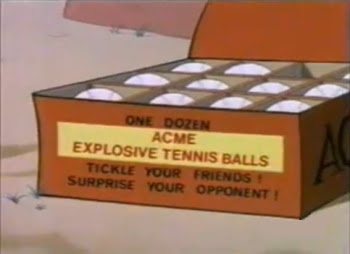 CAP's of note today included "Quibbles" (CARPS) - both of which are great words ; "Found groovy" (DUG) ;  and "Be sociable" (INTERACT) - notably not my specialty! Fill-wise I liked SHEAF, CERISE, and DOGE. I was entertained by the game show triad of TREBEK ("Late 'Jeopardy!' host Alex"), SPIN ("'Wheel of Fortune' play"), and DOOR ("Choice on 'Let's Make a Deal'").

Although it was fun to try to solve the puzzle with the Across answers alone, it meant I missed out on (while solving) what turned out to be four excellent grid-spanning Down answers, including PEAKPERFORMANCE and HEIGHTOFFASHION. My favorite, though, was TOPOFTHEMORNING a "quaint greeting" I can actually use today, dear readers, thanks to the timing of the review. :)